Noory bites the hand that feeds him 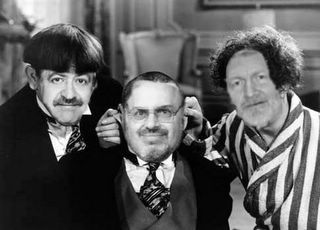 Actually that photoshop is a lot nicer than the way I feel about Noory and Hoagland right now.
Sure I have in the past been irritated by certain George Noory statements and some Art Bell ones as well, but Monday night Noory and Richard C. Hoagland went way over the line in my opinion. The conversation started innocently enough with Noory asking Hoagland what he thought about Dr Steven Greer's interview with Art Bell over the weekend. Hoagland basically said that ufologists don't provide any evidence for their claims, unlike him and made it sound like the whole field of ufology is just a big waste of time. Then Noory got into the act by also slamming ufologists for providing no evidence and having the nerve to say that nothing had advanced in the study of ufos in the past 30 years. Hoagland agreed with that and went on some more to glorify himself and his so called evidence. Why does Hoagland think his Mars images are somehow better evidence than the numerous ufo pictures and videos? Hoagland is the same guy that used a tequila ad to try and provide evidence of a weather modification conspiracy and he has the nerve to go after ufologists? We all know that Hoagland's ego is way out of control, but to have Noory sit there and agree with him and actually join in the basing of ufologists is unbelievable! They spent almost an entire 30 minutes mocking ufologists and pretty much, though without saying it straight out like real men, called Dr. Greer a liar. They said SETI is a small organization and if people really were coming to Greer with these claims they would have been found out by now and fired. Maybe Noory doesn't realize it, but it is ufology that has made c2c the popular show that it is. Bashing ufology is the same as bashing the audience and the show itself. I don't expect much better from Hoagland who is trying to pimp his own stuff, but SHAME on you George Noory!
As I was writing this I listened to the first hour of c2c. I had expected some sort of apology from Noory, instead I got Seth Shostak. Shostak bashed Greer and his lack of evidence and what he called false information, once again Noory went right along with it and actually had the nerve to worry that Greer may somehow harm SETI. I don't mind c2c giving both sides of a story, but Noory seems to be taking sides, along with harming the people who have most helped c2c to grow and thrive. I spit on you Noory!

Too bad I never listen to c2c. I think I would have enjoyed this interview.

I agree with you on this, Lesley. And I have a lot more beef with Noory, Art, Hoagland and the direction coast has taken in the last couple of months.

About Hoagland - I used to gently put up with his eccentricities but lately he's been insufferable, smug and smarmy. Some years ago I subscribed to a newsletter for $25 and after a few months got one, one, chintzy piece of junk. He's gone downhill so much from his interesting days it's absurd.

I've lost all respect for both Art and Noory, sad to say. I know this stems from my personal political outlook but that's the way it is. They both are showing their true colors in the face of our headlong rush into total destruction. They're falling all over themselves sucking at totalitarian teat, rolling in their nightly obeisance to their masters like good little lapdogs, cheating and boring us with the same old safe droning crap. If and when they get back to cutting edge and desperately needed material maybe I'll get back to listening nightly.

And who's on tonight? World class dipshit Sean Morton. He's not even entertaining in his breathless idiocy to suffer through.
What a waste.

You have to stand with friends who have proved themselves over the long haul, tried their sustainable (also over the long haul) best, and called it as they found it, while doing their damnedest to remain uncorrupted by convenient ideology, respectful of the data, and with a guileless sincerity _plain_. Druffel and Howe spring readily to mind.

Also plain is that a ufological "real-estate" is being carved by divergent *forces* as we speak. I'm sure that the persons to which you allude are feeling the heat of an INTERNET hoard of Vandals howling at their previously *legitimated* Gates of informational preeminence. Too bad. Blogs of *savages* abound!

I am confident that the aforementioned sincerity, respect for the data, and an authoritative 'truth-seeking' attitude well help like persons to productive banners, in the first place... and what is without relevancy, reputation, authority, intelligence, consistency, integrity, or accuracy... who does not hew _to_ the sexless authoritative and _eschew_ the chauvinistic authoritarian... will just be swept away like a snake's sloughed skin... in the second.

Your rage and expressed sentiment of perceived betrayal is admired, Lesley, and I stand with you in support of the sincerity of same.

These guys could do their jobs better and their *competition* waits in the wings of a VAST INTERNET. Smugness is reaction to threat and an indicator of the weakness of a position. You help them strengthen, efficaciously it is hoped, their positions... ...do their jobs better.

Girl, _wrong_ you'd be more correct than your conjectured opposition on that point. Rock on!

Thanks Randy and Alfred!

We all know that Noory is a shameless bandwagon jumper-on-er, and generally agrees with whoever his guest is. He defends himself by saying that Coast is supposed to allow the guest to state their views & opinions unconested. However, that does not mean he should blindly agree with whoever is speaking just to curry their favor.

Despite what he said with Hoagland several months ago, wasn't Noory the same guy who has worshipped at Stanton Friedman's alter each time he has been on since then? I wonder if Stan is aware of Noory's statements of that evening?